It was 2:30am. I was sitting in the dark in a rocking chair holding my tiny, screaming, two-week-old baby. My mind was totally blank. I was paying no attention to the baby in my lap - his screams had become such a part of everyday life I had sadly started to block them out. No one I talked to believed there was anything wrong with my baby - he was just "colicky".

After two weeks of fighting not to have him readmitted to the hospital for jaundice, I refused to let anyone else prick his poor little feet. He had band aids on both heels and they looked so awful I couldn't bear to look at them. I stopped taking him to appointments as they never told me anything different than the last time and it seemed to take so much out of Luke to have his clothes taken off, be weighed, measured, checked, and poked. I was being pressured to have him vaccinated (my children are 100% unvaxed, but that's another post) and because I was refusing I caught a lot of flack from the doctors at the clinic we were sent to by the hospital. I was madly searching for someone new.

In the mean time, I had started to notice that where he was once round and pudgy, Luke's skin was becoming loose and thin looking. At first, I thought the yellow of the jaundice must have made it appear that way. By the time he was 4 weeks old, he was still wearing newborn clothes and diapers and I could see his ribs. I finally found a doctor who would take on an unvaxed baby but she couldn't see him for two weeks.

During the entire first six weeks of his life, Luke screamed. I don't mean crying to be held or changed - I mean blue faced screaming. 24/7. When he wasn't crying, he attempted to nurse. These sessions were limited to about two minutes before he was screaming again. Sometimes I wondered what would happen if I just put a pillow over his face. I was so depressed and so sleep deprived that I considered harming my own child. As shameful as that is to admit, post-partum depression is very real and is not often addressed. Mine was never diagnosed and I praise God for getting me through the rough times.

When we finally got in to see the doctor, Luke had lost 8 ounces. He was dehydrated and starving. He was diagnosed failing to thrive. The doctor was not interested in addressing the problem; her solution was, "Just give him formula. He'll be fine." I wasted no time in telling her I would NOT be giving my child formula and I wanted to know why he was not gaining. Obviously there was a problem; wasn't it her job to help me fix it? After much conversation, she finally sent me back to the hospital to do a pre and post weight with a lactation nurse. First Luke was weighed, then he nursed, then was weighed again. After 40 minutes of breastfeeding, Luke had only taken one ounce of milk. A healthy baby should have been able to take at least four. Back to the doctor we went. I finally agreed (after much debate and lots of tears) to give him formula. Obviously there was a problem, but until it was resolved, Luke had to eat.

I tried with all my might to pump enough milk for my poor baby. For six weeks my supply had not been stimulated as much as it needed to be and I struggled to express even one ounce. I still pumped faithfully and mixed what little I got with the formula. Even with a bottle, it took him nearly 20 minutes to get down one ounce.

The first night on formula was an even bigger nightmare than the previous six weeks. My baby vomited constantly and had so much diarrhea I feared he would need IV fluids. I sobbed while bottle feeding him. I stopped giving him formula and called the doctor who told me to come in right away. She checked him over and discovered he'd lost even more weight. She put him on soy formula. This was the pattern for three weeks. After 16 (yes, sixteen!) different kinds of formula, she put him on a by-prescription-only-hypoallergenic-dairy-and-soy-free-$60-a-can formula. It caused the worst reaction. I had never before or since seen a peeling, bleeding diaper rash like my baby had from that awful stuff. At this point, I started making formula from scratch. I used organic rice milk, flax seed oil, protein powder and a few other ingredients to try to put weight on my little guy. It did work, but it was very slow and I kept looking for something better.

A friend told me about La Leche League. At first I thought, I've already seen lactation consultants - what else can seeing another one do for me? She finally talked me in to going to a meeting saying she would come with me. And it was there that I met Joy, my Godsend. She saw Luke and I privately, at her house. She took special care in examining Luke's mouth for problems like tongue tie or cleft palate. She watched him latch on and counted how many times he sucked and swallowed. A normal suck/swallow ratio is two sucks per one swallow. Luke was sucking 15 times before swallowing. He was working so hard to eat that he was just burning more calories than he was taking in. She told me that the little piece of tissue inside Luke's upper lip (called the labial frenulum; it ties your upper lip to your gums) was short and thick. This condition could definitely cause a problem. She also noticed that it appeared Luke's skull plates were on top of one another. She suggested a CranioSacral Therapist might be able to help. Joy also told me about the Mother's Milk Bank. Breastfeeding moms with an oversupply were carefully screened and then donated their milk to the bank where it was flash pasteurized, frozen, and distributed to people in need. The catch? It is by prescription only and the baby had to be failing to thrive.

I took Luke to two local Ear/Nose/Throat specialists to try and get his upper lip addressed. I gave all of the Milk Bank information to Luke's doctor and begged (to no avail) for her to write a prescription. I felt so helpless. I finally made Luke an appointment at a Children's Hospital 100 miles away.

Joy did quite a bit of research on my behalf and discovered a CranioSacral Therapist 70 miles away who would treat a baby. I wasted no time in arranging an appointment. Luke screamed all the way there. After ten minutes, the therapist informed me that no less than five of Luke's skull plates had been displaced by his face-up birth. He also had a dislocated jaw from being born with one hand next to his face. I cried. My poor, poor baby. All this time he'd been in so much pain and no one noticed! He was nearly four months old and not one "medical professional" had taken note of his pain. After one session, Luke slept all the way home.

If you look closely, you can see the ridge in Luke's head a little above and in front of his ear. This is after being treated once by a CST.

After a couple weeks, I finally secured an appointment with a pediatric ENT at the Children's Hospital. She confirmed what I already knew; Luke's labial frenulum was short and tight. She assured me this could not affect breastfeeding. She instead told me he probably suffered from acid reflux and had a sore throat thus making it painful to swallow. I thanked her for her time and sent her no less than a dozen links to scientifically proven research about how a labial tie DOES affect breastfeeding. She didn't thank me.

About a week later, Luke's doctor finally agreed that maybe it would be best if he was fed breastmilk. As Luke had been failing to thrive since the age of six weeks, we had already met that requirement. I got a shipment of milk from the bank frozen on dry ice. Luke drank 10 ounces in one sitting! I was SO happy! He normally took about four ounces if I was lucky! He was six months old when we got the breast milk and he gained four pounds in three weeks. Hallelujah! 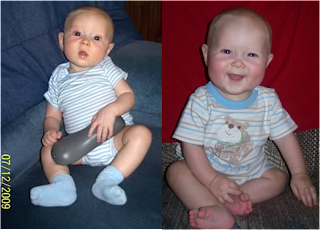 Problem solved! Well, sort of. I still had to solve the problem of his lip tie. I ran across an article in my research about dentists knowing more about how the mouth has to function to effectively breastfeed. I immediately made an appointment with the dentist at the Children's Hospital. She also happened to be a breastfeeding mom and wasted no time in telling me Luke's lip absolutely was the issue and it needed taken care of. A topical numbing agent was applied to the lip and a laser was used to precisely cut the tissue, cauterizing the wound as it cut. There was no bleeding and it didn't seem to cause Luke any pain. For the first time in his life (only minutes after surgery) Luke was able to latch on and nurse as babies were intended to.
My battle was not lost! Praise God!
However, at the time, I was already pregnant with Nathan. I had virtually no milk. We still relied on the Milk Bank for nearly all of Luke's nutrition. When he was nine months old, he was no longer failing to thrive and the Milk Bank informed me that he no longer met their requirements. At their suggestion, I began using organic goat milk and we never looked back.
That first year was so hard, and at times I thought Luke and I would never make it through. But today, as I look back, if putting my story out there helps just one mom, it will all have been worth it.
Posted by ~SingleMomFighting~ at 3:07 AM

Were you vaccinated as a child?

Will you vaccinate your children?