What tweaks my melon ...

Especially from a child.

Especially from a toddler.

It's like once the child is old enough to start questioning and communicating and thinking for himself that fit hits the shan and parents lose their minds.

Example: Not using a spoon correctly. Boy uses the spoon to put refried beans in his hand and then in his mouth.

Result: Mom scolds him for getting his hands dirty and tells him to stop making a mess.

Earth to Mom!! The refried beans he's eating will wash off his hands!

What he's also learning when his experimenting is so rudely interrupted is that experimenting is a bad thing that makes Mom mad. It warrants a scolding and sometimes worse. So learning new things must be a no-no. Better not do that again.

Is that really how you want your child to view the world? That discovering anything on his own is a bad thing and he better just do what everyone else is doing? Don't you want him to learn to solve problems and think for himself?

Maybe we should rethink this.

What if Mom gave words to what he's experiencing? What if instead of scolding, Mom said, "Beans are squishy, huh? Are they warm? Are they cold? Now see what they taste like! Are they good? Do you like beans? Take another bite. Are they all squishy and warm?" 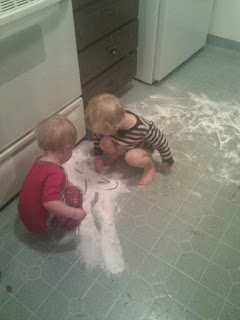 My children playing in an entire box of baking soda.

Giving words to what he is experiencing enables him to better label what he's feeling whether he's sensing it by touch/smell/sight/taste/hearing or feeling it emotionally. Children are constantly struggling to find a way to express themselves. If you don't like the way they're doing it, maybe you should enable them to learn a new, more productive way instead of getting angry/frustrated and throwing an adult temper tantrum.

Yep. When you got mad at your child for spilling his juice all over in the toy box, think about what happened. You raised your voice, marched over to him, gave him a rather loud talking-to, possibly spanked him, and angrily pointed down the hall and sent him to his room. Is that not the adult equivalent of crying, screaming, throwing oneself on the floor and pounding one's fists?

Children learn what they live, not what you tell them to learn.

Want a respectful child? Treat them with respect. We often treat strangers with more respect than our own children. Would you yell at a stranger? Hit them? Humiliate them for making a mistake? Criticize their every effort to do what they've been asked?

No. Why? Because they'd probably call the police and report harassment or assault. If it were a co-worker, it could be considered discrimination.

But it's okay to treat your child this way? It's not discipline. It's total disrespect. Disrespect for your child's feelings. For his needs. For his innate desire to explore and learn and grow. Would you like it if someone treated you in such a way - especially someone who was supposed to love you unconditionally and provide for your every need?

Do I want you to let your child run the house with his little boy antics? No. If what he's doing is not appropriate for the time and place, gently tell him so. "We don't splash in the dog water. If you'd like to splash, let's go outside." My kids love textures. Instead of mixing their drink with their sandwich at the table, we eat lunch with the promise of going outside to mix up some mud. We add grass to one bucket of mud, sand to another, and extra water to another. They love it! 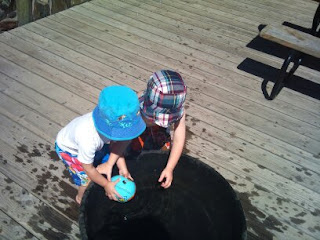 Splashing in a big rubber tub at Gramma & Grampa's house instead of
playing in the dog water.

Think before you react next time you're faced with a challenging situation that involves your child's behavior. Ask yourself where that behavior might have been learned. If it was from you that the reaction was learned, change it. As with most things worth doing, it's not easy, but it will be worth it.

Just wanted to make you THINK.

As always, take what you can use and leave the rest.


Posted by ~SingleMomFighting~ at 1:06 AM

Were you vaccinated as a child?

Will you vaccinate your children?